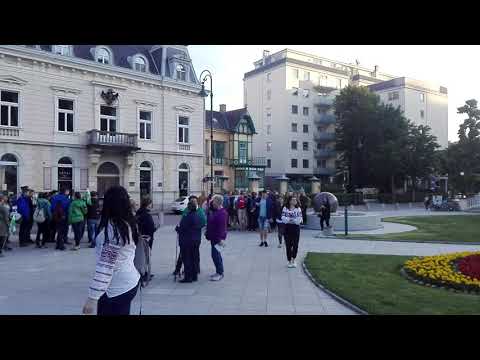 So a few days after the sponsored EX-Raids held place in Austria (where i just watched, but no invite), i finally got my very first EX-Raid invite.
It was for a gym in the city Baden, which is the capital of our district.
While in the first EX-Raid wave (sponsored), only 1 person in our district-wide raid-group got invited, this time many people in our group got one, including me and my Raid Buddy. Strangely, some of the most active players in the group still were being left out.
One thing is noticeable: While my buddy lives in an other town which got it's own EX-Raid, he got the invite for the gym where we had done a raid together in the past. He would be very likely in the pool for both EX-Raids, but he got the invite for the gym together with me. Anyways, that's a cool thing, and we both were very excited.
The raid invite was scheduled on a Sunday noon, the day when Beast-rotate hit us. We got the invite on Sep. 27 so it was 5 days in between. Pretty cool since it gave us long enough time to organize and team up (which wasn't hard because we have our raid group).
The night before the raid, me and some other Valor guys and girls claimed the gym and sticked in some handselected defenders inside. From the early morning until the raid started, the gym was always heavily under attack, but our team defended it sucessfully (RIP Golden Razz).
It was a busy morning because Legendary Beast rotation hit our country and so we started early morning too and made some Suicune raids. Half an hour before start, we headed to the gym.
It was a street corner next to the city casino. There wasn't much free space for all of us, we were standing all over the walkway. Not very optimal for playing but it was ok and people were taking care if pedestrians wanted to walk by.
At the raid, we were ~30-40 people. ~13 Mystic, ~10 Instict and ~14 Valor. We split up teamwise to make at least 3 color coded battle groups
At first we (the gym defenders) wanted to do an own small private group to maximize Damage balls, but since 14 Valors wasn't a very high count and we don't wanted to risk that 1 group would not make it, we decided to make 1 big Valor group. I don't know how the other teams grouped but i think it was 1 group per team. We waited a few minutes but started quickly after we made sure everybody is actually here.
The Fight: We got the worst case. Focus Blast. All resources we poured into our Tyranitars was negated instantly. But we downed him anyways pretty fast (Despite focus Blast, i still went in with my 6 Lv30+ Tyranitars, i even survived with the last one. The focus blast was always a OHKO in my case though). We even got 201 seconds left the moment he died :D
Catching: I was insanely nervous and so i backed up away from the others and took a deep breath. Circle lock, wait for attack, curve... great throw. Gotcha! First ball catch! The great feeling of relief overmanned me. I got my first Mewtwo!
Right after that he went through a CalcyIV-Test and he has 82% IV. Not perfect, but it's a Mewtwo, so he got all the Stardust he asked for. He is now a Lv 35 3616CP with C/SB and i am very proud of it. I was able to catch it for another person who asked me to catch it since she wasn't experienced with curveballs. And finally, i could unload my 400+ rare candies from my bag. Especially since we got the useless Suicune as our next beast.
From what i heard, 3 or 4 Mewtwos got away. One was playing on an IPad, making it difficult to throw, and one unlucky child. The best one I know was a 93% and was catched by our Team's defense-leader.
One sad thing i noticed after the raid: 2 or 3 people got to the raid too late (i don't know how much too late though), and they weren't able to find a group since everyone has already finished.
Overall, it was great fun! We had no technical problems (from what i can tell), and people were very disciplined and cheerful.
While i am still not a big fan of the EX-concept (being left out is an awful feeling), i am happy that i was chosen for the first non-sponsored EX-Raid in Austria.
Thanks for reading. I hope you all get invited too!
TL;DR: veni vidi vici ;)
Edit: i found out later some Valor people played in the Mystic battlegroup, so the exact total team count may be incorrect. Our battle group was definitly 14 Valor people.